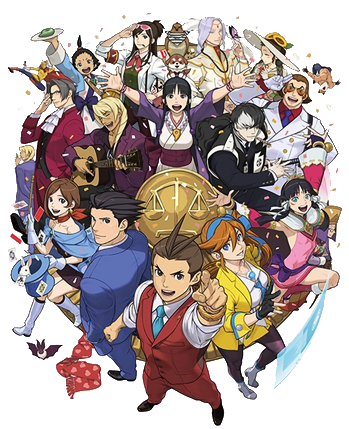 Originally released in Japan as the Gyakuten Saiban (Turnabout/Reversal Trial) series on the Game Boy Advance, the Ace Attorney franchise chronicles the adventures of hotshot young defense attorney Phoenix Wright and his friends, allies, and protégés as they investigate their clients' cases (which are usually murders). It is one of the rare Visual Novels to have a large-scale distribution in the West, where the entire series (aside from one spin-off title) has received an official release. The gameplay is part point and click, part mystery game where one finds logical inconsistencies in dialogue, part visual novel. There is no item combination and the story is mostly linear. It is well-known in English-speaking locales for its colorful cast of characters, its twists and turns, and its above-and-beyond localization (outside of a few grammatical errors).

The central series consists of the following games:

Additionally, a few spinoffs and cross media instances have been released:

The franchise has also branched out into other media, including:

There is a (work-in-progress) recap page for the series here.

open/close all folders
# - B
C - F
G - M
N - R
S - Z
Phoenix: OBJECTION! Your Honor, what do you think about the trope page?
Judge: Uh... I'm not sure I follow you.
Phoenix: It clearly, er, contradicts the... um... I thought...
Judge: You don't sound very convinced, Mr. Wright. Objection overruled. (boom)
Phoenix: (I don't think that won me any points with the judge...)
Feedback