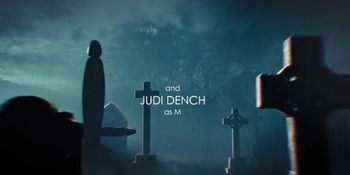 Get your funeral attire ready.

Advertisement:
open/close all folders
In General
Goldfinger
Thunderball
On Her Majesty's Secret Service
Advertisement:
Diamonds Are Forever
For Your Eyes Only
The Living Daylights
GoldenEye
The World Is Not Enough
Advertisement:
Die Another Day
Casino Royale
Quantum of Solace
Skyfall
Spectre
No Time to Die