Film / Yogi Bear and the Magical Flight of the Spruce Goose 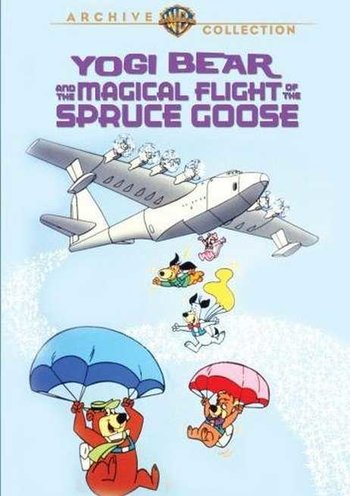 Yogi Bear and the Magical Flight of the Spruce Goose is a 1987 television film produced by Hanna-Barbera as part of their Superstars 10 series of syndicated TV movies. The film stars Yogi Bear and other H-B characters like Boo-Boo, Huckleberry Hound, Quick Draw McGraw and Snagglepuss as members of a tour of the famous Spruce Goose. While exploring the plane, it magically takes off, sending the gang on an outrageous adventure. And before you ask, yes, that Spruce Goose

the H-4 "Hercules" military airlift flying boat prototype made by that Howard Hughes, and which only flew once in its entire career before the project was cancelled and the plane itself put on public display. This is one of the least wild parts of this movie, as Yogi, his stowaway friend Bernice, and the gang travel the world in the magic-powered airplane on a high-flying adventure encountering friendly aliens, evil poachers, and the scheming Dread Baron and Mumbly, who has his own plans for the Spruce Goose.