Film / X-Men: Days of Future Past 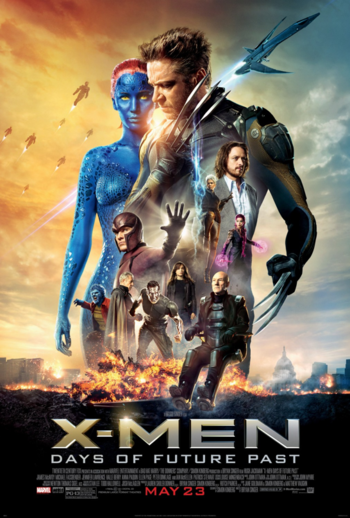 "Is the future truly set?"
"I don't want your suffering. I DON'T WANT YOUR FUTURE!"
— Charles Xavier

X-Men: Days of Future Past is a 2014 sci-fi superhero movie in the X-Men Film Series, adapting the Marvel Comics story of the same name. The seventh installment in the series, it is a sequel to X-Men: First Class, The Wolverine AND X-Men: The Last Stand as well as both sequel and prequel to the original X-Men Trilogy, re-combining the semi-tangled film universe into a single narrative. The film is directed by Bryan Singer, of X-Men and X2: X-Men United fame, with First Class director Matthew Vaughn serving as a producer. It is the first movie in the franchise to receive an Academy Award nomination (Best Visual Effects). An alternate version of the film with 17 minutes of additional footage was released on Blu-Ray/DVD in 2015 and subtitled The Rogue Cut.

In the year 2023, mutants have become an endangered species, hunted by the mechanical "Sentinels" of Trask Industries. With nowhere else to turn, Professor X and Magneto band together for a final desperate plan: using a particular mutant's Time Travel powers to send one of their own into the past, and stop the war between man and mutant before it ever begins.

X-Men: Days of Future Past provides examples of:

Tropes G to L
Tropes M to O
Tropes P to S
Tropes T to Z
"We need you to hope again."
Feedback

Charles Xavier attempts to enforce a lockdown to break Erik Lehnsherr out of a government prison. When it's obvious that it's not working, Logan decides to take a more direct approach.

Alternative Title(s): Days Of Future Past

Charles Xavier attempts to enforce a lockdown to break Erik Lehnsherr out of a government prison. When it's obvious that it's not working, Logan decides to take a more direct approach.