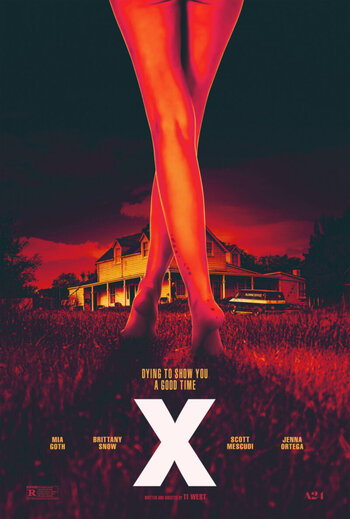 Dying to show you a good time.
Advertisement:

X is a 2022 slasher film written and directed by Ti West (The Innkeepers, In a Valley of Violence, The House of the Devil) and starring Mia Goth, Jenna Ortega, Scott Mescudi, Martin Henderson, and Brittany Snow.

The group's trip leads them to the rural home of a reclusive, elderly couple, where they begin shooting the film without their knowledge. They then find that the elderly couple have begun to take a mysterious, lascivious interest in them, and as the day turns to night, their situation takes a dark turn that leaves them fighting for their lives.

X was officially released on March 18, 2022, by A24, under a week after its SXSW premiere. At the festival, West revealed a prequel to the film titled Pearl was already in post-production, shot back-to-back with the film and centering around the elderly woman of the couple in her younger years. The film was released on September 16, 2022. Three days before that, Ti West and A24 announced a full sequel titled MaXXXine, once again starring Mia Goth as Maxine seeking to make it as an actress in 1985 Hollywood.