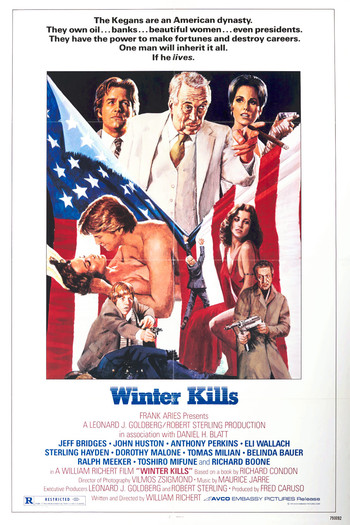 Winter Kills is a 1979 political thriller/black comedy film directed by William Richert, adapted from the 1974 novel of the same name by Richard Condon (The Manchurian Candidate). The story is inspired by the assassination of U.S. President John F. Kennedy and subsequent conspiracy theories surrounding it. Jeff Bridges, John Huston, and Anthony Perkins head the cast.

The film opens with Nick Kegan (Bridges), the half-brother of the young President who'd been assassinated nineteen years earlier, hearing the confession of a dying man who claims to have been a second shooter in the assassination, giving as proof the location where he stored his rifle. Nick goes with a friend and the police to retrieve the rifle, but they are shot by a sniper and the evidence is stolen.

Nick tells his father's aide John Cerruti (Perkins) and goes home to inform his intimidating father (Huston) of what he's discovered. "Pa" Kegan vows to uncover who killed his son at any cost.

Nick confronts eccentric industrialist Z. K. Dawson (Sterling Hayden), named by the dying assassin as part of the plot. Dawson is engaged in a war game with real tanks, and though admitting he didn't like the late President, denies having anything to do with his assassination, naming the Philadelphia Police Department instead. He then chases Kegan off his ranch with the tanks firing live shells.

Meanwhile, people connected with the assassination keep dying, including the man who wrote down the confession. Kegan speaks to Ray Doty, a former Philadelphia police officer with knowledge of the plot. He relates how Joe Diamond (Eli Wallach), a small-time hood in debt to the Mafia, was ordered by them to kill Willie Arnold, the patsy assassin, after he was arrested by police.

When Nick returns home after seeing his girlfriend in New York, a hitwoman in a maid disguise tries to kill him. After contacting the Mafia, he pays them to give him the name of the mobster who ordered the hit, after which they are killed by a bomb blast he barely escapes.

Next, his father arranges to have another imprisoned mobster released and meet with Nick under guard. The mobster tells him that he's been fed false information about the assassination. Then he finds all record of his girlfriend at her work and home has mysteriously disappeared. The friend who brought him the assassin, who Nick heard was killed, turns up alive, having faked his own death to protect himself. He warns Nick of the same thing as the mobster, that he's been led astray and won't be able to tell the truth from lies.

Nick talks with John Cerruti, who says that Hollywood actress Lola Comante (Elizabeth Taylor, in a brief uncredited cameo role), ordered him killed after he refused to pay back the Mafia for their help in getting him elected. The President was not aware of this, as his father had done the deal without him knowing, and breaks off contact over it. Cerruti also reveals that Nick actually never met with Z. K. Dawson, but that it was a "skit" he arranged, explaining the bizarre tank chase. The real Dawson, he says, is in fact his girlfriend's father, and she ordered the President's assassination. Nick finally loses it at these mind games, and beats the truth out of him, leading up to The Reveal and Twist Ending.

This film contains examples from the following tropes: