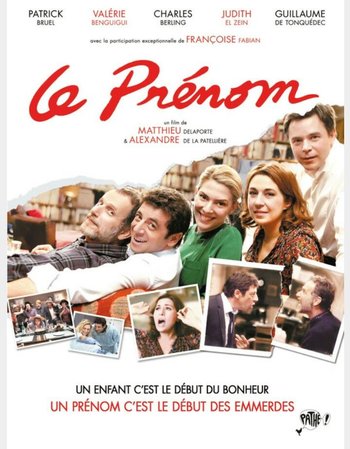 What's in a Name? (Le Prénom) is a 2012 French comedy film written and directed by Alexandre de La Patellière and Matthieu Delaporte, starring Patrick Bruel, Valérie Benguigui, Charles Berling, Judith El Zein, Guillaume de Tonquédec. It is an adaptation of a homonymous play by the same authors and with almost the same cast. Élisabeth and her husband Pierre invite her brother Vincent, his wife Anna and Claude, a childhood friend, for dinner. Anna is pregnant and Vincent announces that they intend to call their son Adolphe. This shocks Élisabeth and Pierre.

What's in a Name? provides examples of: