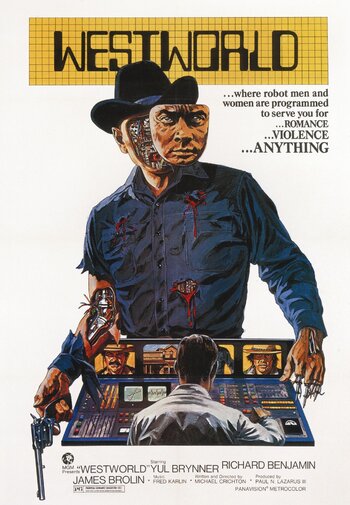 "Boy, have we got a vacation for you!"
Westworld is a 1973 science fiction thriller film written and directed by Michael Crichton.
Advertisement:

In the near future, Delos is an expensivenote $1000 a day in 1973, equivalent to about $5657 a day in 2018 adult amusement resort offering simulations of The Wild West, Medieval Britain, and Ancient Rome. Each park has a population of humanoid robots, with whom visitors can interact however they wish. As a part of the Delos experience, one can fight with them, seduce them, and even kill them. After all, the robots are programmed not to feel pain or fight back, and the weapons provided only work on machines. They're harmless.

Two friends, John Blane (James Brolin) and Peter Martin (Richard Benjamin), arrive in Delos to get away from their busy lives. They head into Westworld, where John has been many times before, to have fun and act out various Western-themed scenarios. In particular, the mousy Peter earns his manhood by defeating the local Gunslinger robot (Yul Brynner) in a duel. In the middle of the night, the robots are rounded up and sent in for repairs, ready for the next day's events.

However, the technicians running the park are having problems. The robots break down faster than expected, the memory wipes are less effective, and they begin to resist the visitor's demands. It is speculated that a computer virus has infected the machines, one that soon causes them to murder humans. Alarmed, the head engineer orders everything shut down immediately, but this only results in suffocating everyone in the control room to death. With the machines running amok, John and Peter discover the Gunslinger has come after them, looking for revenge...

Futureworld, a 1976 sequel made without Crichton's involvement, removes the original film's giallo influences, being more akin to a sociopolitical thriller. The Delos resort has been revamped and re-opened, and a pair of Intrepid Reporters (Peter Fonda and Blythe Danner) are invited to preview the park's attractions (including a new theme park, Futureworld), but soon learn that Delos's backers have much more sinister plans for their improved robots... Notably, Yul Brynner's "Gunslinger" shows up in Futureworld, but only in a Dream Sequence and having absolutely no logical connection with the original character. Both movies were followed up by a very short-lived television series, Beyond Westworld. In the series, set after the first movie, John Moore (Jim McMullan), the head of security for Delos, and agent Pamela Williams (Connie Sellecca) are sent after mad scientist Roger Quaid, who aims to uses the androids to take over the world.