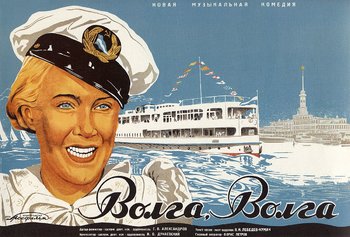 Volga-Volga is a 1938 film from the Soviet Union, directed by Grigori Alexandrov.

"Strelka" Petrova lives in a quiet village on the Volga River. She is a letter-carrier called strelka ("arrow") for her swiftness in completing her appointed rounds. Her boyfriend Alyosha is a tuba player and bandleader at the local music college, while Strelka herself is a talented amateur singer and songwriter.

The village leader, a self-important blowhard bureaucrat named Byvalov, gets a telegram (carried by Strelka) announcing a "musical Olympiad" in Moscow. This starts a fight between Strelka, who insists that she and all her amateur musician friends should go and play Russian songs for the contest, and Alyosha, who says that he and his classically-trained friends should go and play Schubert. Byvalov unsurprisingly backs Alyosha's orchestra, leading Strelka to organize a rival group of her local friends, who board a second Volga riverboat and attempt to outrace Alyosha's group to Moscow. Meanwhile, Strelka writes a song, "Soul of the Volga", about the river that is thought to be key to the Russian nation.

That gossamer-thin plot is just an excuse to string together a lot of songs and musical numbers. Volga-Volga was reportedly Josef Stalin's favorite movie; he sent a copy to Franklin Delano Roosevelt.note Stalin also liked American cowboy movies. This cheerful, peppy musical played in Russian theaters at the height of the Great Terror

in which Stalin executed as many as 700,000 Russians and sent millons to the gulags, where hundreds of thousands more died.