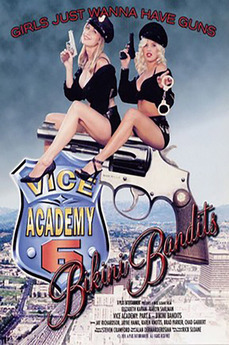 Vice Academy was a series of comedy films directed by Rick Sloane (of Hobgoblins infamy). The films revolved around a group of scantily clad female vice cops and their wacky adventures in capturing criminals...who also happen to be scantily clad.

Though low-budget and critically maligned the films were a ratings hit for the USA Network where they routinely aired late night Fridays and Saturdays on the network's "Up All Night" programming block (as back then original programming on cable was rare and USA in particular was the "used car" network, mostly subsisting on reruns and other scavenged stuff). The series' status as a late night staple (and its focus on sexy criminals) mistakenly earned it a reputation as being soft-core porn when in reality the films have little to no sex and nudity (even in their uncensored form).note According to Sloane, this was done intentionally so that the films could be shown on television with minimal edits

The series consists of six films: