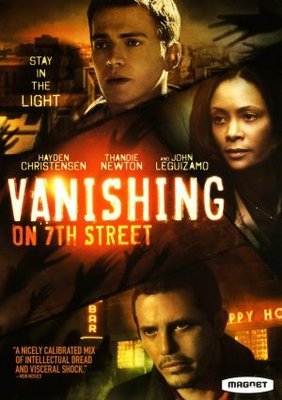 Fear of the dark has always been a primal instinct for humanity. The darkness hides any number of unknowns, such as nocturnal predators or obstacles to walking. We usually overcome our fear of the dark in early childhood, because there isn't really anything dangerous about the dark.

A power outage has just hit Detroit, and almost the entire population has vanished, leaving behind empty clothing, abandoned cars, and an assortment of non-organic parts. A spare handful of people are left behind, forced to scavenge for light sources to survive. This time, the danger isn't in the dark. It is the dark.

The Vanishing on 7th Street (2010) is a post-apocalyptic thriller film directed by Brad Anderson and starring John Leguizamo, Hayden Christensen, and Thandie Newton.