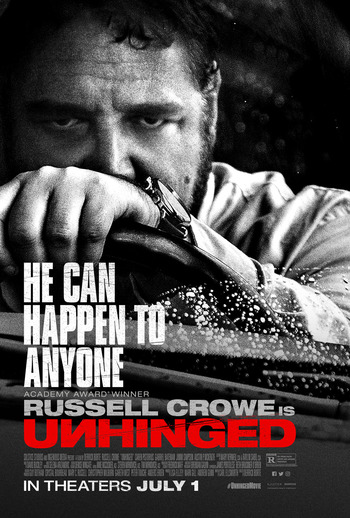 Rachel Hunter (Pistorius) is a single mother struggling to make ends meet for herself and her teenage son Kyle, as well as her freeloading brother Fred and his fiancée Mary. Events conspire to get her stuck in a typical New Orleans rush hour traffic jam, where she thinks nothing about honking at some dude in a grey pickup truck who failed to notice the green traffic light. Big mistake. Said guy - chillingly portrayed by Russell Crowe - is not only having a really bad day himself; he also murdered two people already the previous night. When Rachel stubbornly refuses to accept his apology and apologize to him in return, he embarks on a brutal campaign to teach her a lesson about mutual respect.

The film was released in Germany as Unhinged - Außer Kontrollenote "Unhinged - Out of Control" on July 16, 2020, with the US release following one month later on August 21, 2020. It later received an Early-Bird Release on digital platforms on October 20th due to some theater closures.

"You better bring your A-game. Because you’re going to need it."