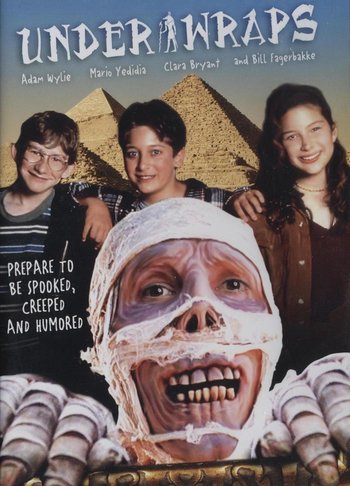 Under Wraps is a 1997 American Made-for-TV Movie. It is considered the first official Disney Channel Original Movie.

Around Halloween, 3 friends, Marshall (Mario Yedidia), Gilbert (Adam Wylie) and Amy (Clara Bryant), find a sarcophagus containing a mummy. As fate would have it, it comes alive because of a conjunction of the moonlight during the time of the month. They befriend and name the mummy Harold (Bill Fagerbakke). They then need to protect Harold from being kidnapped and sold while also trying to reunite it with his old love.

A remake aired on Disney Channel on October 1st, 2021, followed by the premiere of The Ghost and Molly McGee.