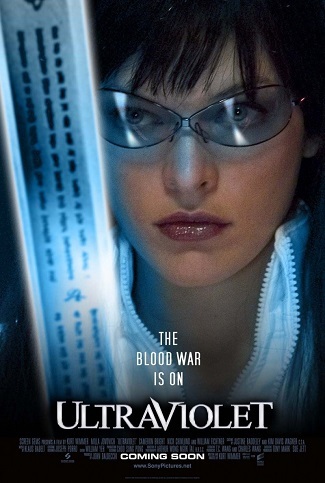 "Hello. My name is Violet and I was born into a world you may not understand."

Ultraviolet is a 2006 Science Fiction / Action film starring Milla Jovovich as the eponymous Violet, fighting in a guerrilla war against the oppressive Arch-Ministry government in a dystopian future.

Violet is a hemophage, a person infected with The Virus that produces symptoms similar to traditional vampirism. The infection confers superhuman senses, strength and agility, but is ultimately fatal. Violet became infected while pregnant, and lost her unborn child as a result of experiments performed on her in a concentration camp for hemophages. She is in the terminal stages of the disease, and her latest mission is also expected to be her last.

Violet infiltrates an Arch-Ministry stronghold disguised as a courier, and escapes with what is supposed to be an ultimate weapon, something which will kill the few remaining hemophages with a single blow. But the "weapon" turns out to be a child named Six, prompting Violet to defy both her own kind, who want him dead, and the Ministry, who want him back.

Ultraviolet was deliberately created to stylistically resemble a Comic Book, with brilliantly colored outfits and hair, and an airbrushed appearance to close-ups. As with many comic books, the action scenes are deliberately over the top. It was not well-received, with a Rotten Tomatoes rating of 9%, but some find it So Bad, It's Good or a Guilty Pleasure.

In 2008, the studio Madhouse produced a 12-Episode Anime series loosely based on the film titled Ultraviolet: Code 044.

Not to be confused with Ultraviolet the British television series, which was also a modern take on vampires, but which could otherwise not be more different in story, style and tone.