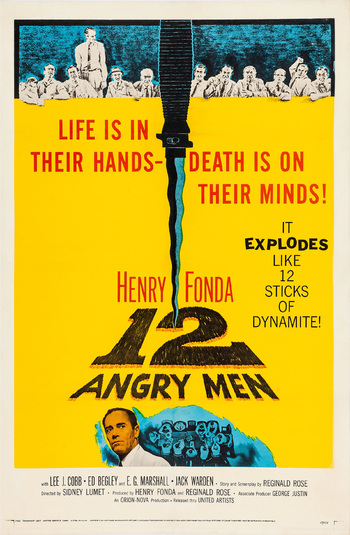 Life Is in Their Hands – Death Is on Their Minds!
"Suppose we're wrong."
— Juror #8
Advertisement:

12 Angry Men is a 1957 drama film directed by Sidney Lumet, adapted by screenwriter Reginald Rose from his own teleplay of the same name. It stars Henry Fonda and a veritable All-Star Cast of character actors as the eponymous jury.

The plot concerns a seemingly straightforward murder trial. An eyewitness, forensic evidence, and the accused himself all seem to clearly point toward an adolescent boy from the slums having murdered his father. In the deliberation room, most of the jury pushes for a quick guilty verdict, but a single juror, known only as Juror #8, holds out and insists that they examine the evidence thoroughly to make damn sure that the accused really deserves his punishment: a mandatory death sentence.

This work is best known for popularizing the Rogue Juror trope, and most of the other works on the Rogue Juror page reference it either directly or indirectly. There is even a redirect to the trope in reference to this film: One Angry Juror.

Rose's original teleplay, which aired on CBS in 1954 as an episode of the live dramatic anthology series Westinghouse Studio One, starred Robert Cummings as Juror #8. The broadcast earned Emmy Awards for Rose, Cummings, and director Franklin Schaffner.

open/close all folders
#-I
J-Z
Feedback