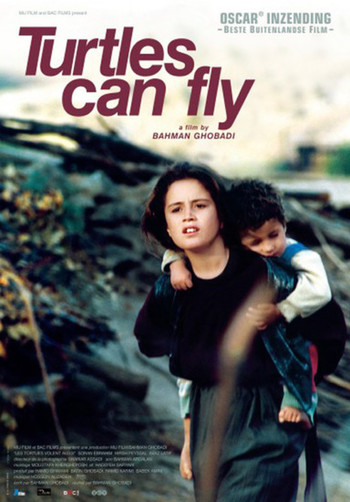 Turtles Can Fly is a Kurdish war drama film directed by Bahman Ghobadi and released in 2004 (at least, in Canada, before releasing the next year for the U.S. and France) as the first film made in Iraq since the fall of Saddam Hussein, who is actually an important part of the plot. It opened to considerable critical acclaim, winning the hearts of people such as Roger Ebert, who gave it a perfect score.

In a refugee camp and small village, residents wait for America to arrive and invade Iraq, hopefully bringing down Hussein but also potentially bringing a violent aftermath that the citizens fear. The Leader of the village is a young boy mainly known by his nickname "Satellite" (given to him for his obsession with technology and strong belief in the usefulness of installing satellite dishes to hear broadcasts about the war), who shows a tangible interest in the United States (sprinkling bits of Gratuitous English in his speech, for example) and takes a role of leadership by organizing the children into work groups that make a living by disarming and selling mines to arms dealers in exchange for weapons.

He ends up falling for a young orphan girl named Agrin who arrives with her armless brother Hengov and blind baby brother Riga. Agrin's main characteristic of aloofness comes from her being haunted by a Dark and Troubled Past that she is unable to fully detach herself from, while Hengov serves as a clairvoyant, being able to see into the future. Satellite initially sees Hengov as a rival, since he puruses the same minefield-clearing job as Satellite, but his desire to please Agrin spills over into her family.

Due to the natures of this movie, keep some tissues handy while watching.

Turtles Can Fly contains examples of the following tropes: