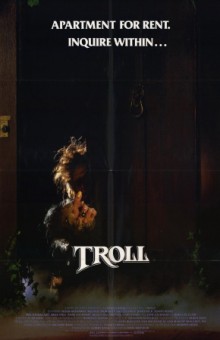 Troll is a 1986 B-Movie about Torok the Troll (no relation to Turok or Torak). Directed by John Carl Buechler, this was misbranded as a horror movie, but it shares far more aspects with the Urban Fantasy genre, and in fact it works better when viewed as such.
Advertisement:

The movie focuses on the Potter family. In case you are wondering, yes, there is a Harry Potter, two in fact (father and son), and this was way before the books. Wendy Potter, the obnoxious little girl of the family, is abducted by the troll, who then takes her form and infiltrates into the family. For the rest of the movie, he takes advantage of the weakening of the magical barriers on Walpurgisnacht to turn the neighbours into plant pods to generate more trolls to take over the world. Anyway, Harry Potter Junior, played by a teenage Noah Hathaway, realises his sister was replaced... after watching two sci-fi movies. And even so, he thinks she's an alien. It takes a meeting with Eunice St. Clair to realise what is really happening, and then he solves everything.

It's worth noting that this movie has no official sequels. The So Bad, It's Good Troll 2 is actually an Italian movie with no relation whatsoever to it, and has goblins instead of trolls. The two Troll 3 movies (original names being Creepers and Quest for the Mighty Sword, respectively) are even less related; the first has no humanoid creatures or magic whatsoever, instead featuring radioactive plants, while the later does feature a few trolls/goblins/whatever but it was meant to be part of the Ator series.

Not to be confused with Dreamworks Animation's Trolls or the dolls

that inspired that film.