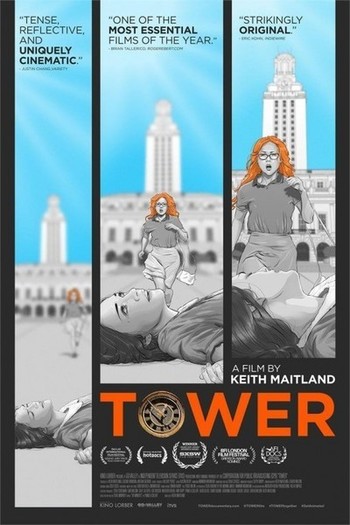 When the worst in one man brought out the best in so many others.
Tower is a 2016 documentary directed and produced by Keith Maitland, which discusses the 1966 University of Texas tower shooting.
Advertisement:

This documentary is a really interesting one that's hard to describe. Most of the movie is told via flashbacks using actors to portray the people at the incident. The film is practically shot like a fictional movie with interviews spliced in. About 90% of the movie is in with mostly black and white rotoscope animation (similar to A Scanner Darkly and Waking Life), with the other 10% being archive footage shot during the shooting. The film also shows the people at the incident and what they were thinking of. The documentary explores themes such as bystander syndrome, fear of dying, sacrifices, bravery, and acceptance.

The film started production in 2006 and didn't go anywhere until a successful Indiegogo campaign where it received $70,000 in six weeks.

The film was critically acclaimed, winning some awards such as the SXSW Grand Jury Award.