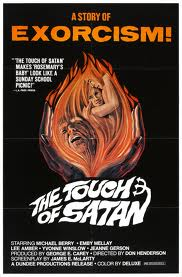 The Touch of Satan is a 1971 horror film. It was directed by Don Henderson, and it starred Michael Berry and Emby Mellay in their only roles. The film was shot in 1970 in the Santa Ynez, California area and featured the early work from makeup artist Joe Blasco. The film was relatively obscure until a 1998 appearance (this episode) on the series Mystery Science Theater 3000, where the film was mocked for its low budget and bad acting.

The movie begins with the murder of a farmer by an elderly insane woman with terribly burned facial features. After stabbing the farmer and accidentally setting his barn on fire (yes, it really is accidental), the woman stumbles home to her family. The family, an older couple and a young teenage woman, argue about the best way to handle the situation and make vague references that the elderly woman may have killed people in the past.

The scene then switches to the main character, a young man named Jodie who is on an open-ended car trip across America to find himself and discover whether or not he wishes to follow in his father's footsteps as a lawyer. Jodie stops at a small pond to have lunch and meets Melissa, the teenage girl from the previous scene.

Decidedly not related to the Orson Welles movie Touch of Evil.