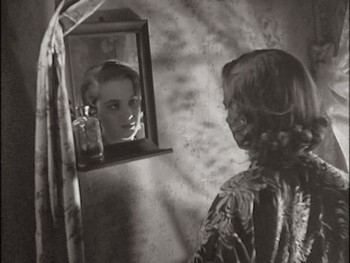 Torment is a 1944 film from Sweden, directed by Alf Sjöberg.

The setting is a boys' school in Stockholm, which seems to have students ranging from small boys to young men in their late teens. The story centers on those boys in their late teens, and specifically Jan-Erik, the scion of a wealthy family. The bane of Jan-Erik's existence is the cruel, nasty Latin teacher, known only by his nickname "Caligula". Caligula delights in tormenting and humiliating his students. Sometimes it's Jan-Erik, and sometimes another student is the target of Caligula's bullying, but they all hate him.

One day after school Jan-Erik stops in the nearby tobacconist's shop, and chats in an innocent way with Bertha, the beautiful young cashier. Later, as Jan-Erik is walking along the banks of the river, he sees a young woman staggering down the steps, so drunk she can barely stand. It's Bertha. Bertha has been driven to drink by another man in her life, an older man who torments her in unspecified but apparently horrible ways. Bertha begs Jan-Erik from protection from the man. Predictably, Jan-Erik and Bertha become lovers.

Three guesses who the other man is.

The screenplay for Torment was written by a 26-year-old new hire to the film studio named Ingmar Bergman. It was his first film credit.