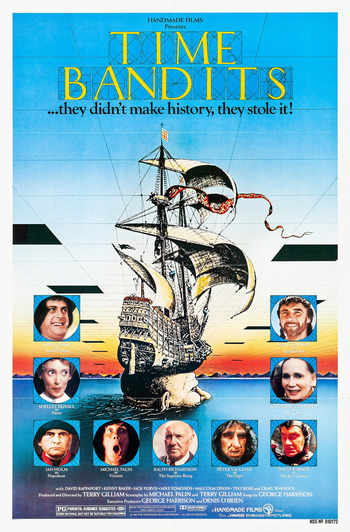 Lads, here's to stinking rich!
Kevin: What are we going to do here?
Wally: A robbery.
Kevin: A robbery?
Fidgit: Of course. We're international criminals. We do robberies!
Randall: Shut up!
Advertisement:

Kevin is an imaginative and inquisitive child whose interest in history is not shared by his shallow and materialistic parents. One night he is visited by a gang of time-traveling dwarfs on the run from the "Supreme Being" (implied to actually be God). Before Kevin can protest, he's kidnapped and forced to accompany them on their adventures through time. The bandits have stolen a map that reveals all the gaps in creation, which allows them to visit virtually any place or historic personality. How do they use this power? To steal all the treasure they can find, of course! Meanwhile, their journey is being covertly monitored by the so-called Evil Genius (likewise implied to be the Devil), who has his own big plans for the map, not to mention the rest of the universe...

Example of:
Don't Touch It, You Idiot!