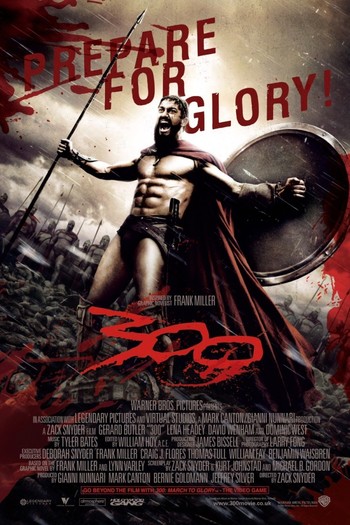 THIS. IS. TV TROPES!
"SPARTANS! Ready your breakfast and eat hearty… for tonight! We dine! IN HELL!"
— King Leonidas
Advertisement:

300 is a heavily stylized Battle Epic movie directed by Zack Snyder, released in 2007 and based on a 1998 comic miniseries by Frank Miller.

In spite of the heavy fantasy influence, the story is based on real events—the Battle of Thermopylae in 480 BC during the Second Greco-Persian War, as described by the ancient Greek historian Herodotus. Miller was introduced to the Thermopylae story through a 1962 Sword and Sandal movie version called The 300 Spartans, which influenced him deeply as a child. The comic and film are extreme examples of historical movies being Very Loosely Based on a True Story, as artistic license is liberally employed (more so in the film than in the comic).

A young, one-eyed Spartan soldier relates to a group of fellow soldiers how recent events came to pass. King Leonidas of Sparta (Gerard Butler) refuses to bow to the God King Xerxes' demands for Sparta to submit to the vast power of the Persian Empire. Leonidas' visit to the deformed, elderly Ephors and their Oracular Urchin/Sex Slave brings worse news: Sparta cannot wage war against the armies of Persia on the eve of the sacred Carneia festival.

After much deliberation, Leonidas decides to defy the oracles' prophecies… sort of. He gathers three hundred of Sparta's finest soldiers (referring to them his "personal bodyguard") and marches them to the Hot Gates, a narrow pass between the ocean and mountains. By rebuilding an ancient wall to bottleneck the vast Persian army, the superior fighting ability of the Spartans would conceivably make up for the small size of their army and give them a fighting chance at holding back the Persian Empire until Sparta's army can launch a full assault. Seven hundred or so other Greeks turn up as Leonidas and the 300 make their way to the Hot Gates, and a hideously deformed Spartan man called Ephialtes also joins the convoy to ask Leonidas for a place on the battlefield (in exchange for information about an unguarded path that would leave the Spartans wide open to retaliation from behind). Leonidas refuses to accept Ephialtes into the fighting ranks—it would leave a weak point in their defense—and returns his attention to preparing for the battle.

In the meantime, Queen Gorgo (Lena Headey) tries to persuade the Spartan politicians to support Leonidas, but Theron—scarily played by Dominic West—is the most stubborn of the lot.

When the Persian Empire brings its forces down upon the Hot Gates, the battle goes exactly according to Leonidas' plan: the fighting skill and perfect defensive position of the Spartans prove to be too much for even the monstrous Persian army to handle. The kill count becomes obscenely lopsided in favor of the Spartans, and the only real problem occurs when Ephialtes sells his information to Xerxes for women, wealth, and a (horrible) uniform.

The film version of 300 is stylized thanks to Snyder's Signature Style, its comic book roots and the story itself being presented as a morale-boosting story told by Dilios. While accurate in some historical aspects (mostly quotes), it is presented first and foremost as a visual Greek epic tale of glory, death, and how battling half-naked is strategically superior. Trying to justify or explain it is as futile as explaining why Matrix should face a court-martial for property damage. Think of this as Sin City (also by Frank Miller) with gold and red instead of white and black… and with far fewer prostitutes.

A prequel/midquel/sequel film, 300: Rise of an Empire, was released in March 2014, and Miller made a sequel comic called Xerxes: The Fall of the House of Darius and the Rise of Alexander in 2018. Snyder has come forth in 2020 saying he's helped writing a third film, but Warner Bros. haven't picked it up.