Film / Thou Who Art In Heaven 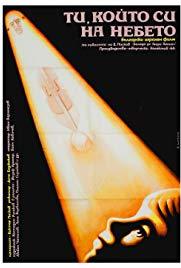 Thou Who Art In Heaven (original title: Ти, Който си на небето [Ti, Koito si na nebeto]) is a 1990 Bulgarian film, adaptation of writer Viktor Paskov's novel A Ballad for Georg Henig. The film tells of the friendship between Georg Henig, a Czech luthier who founded Bulgaria's luthier school, and a boy named Viktor. Henig, once a pioneer of his art in Bulgaria, is now living in abject poverty after the 1944, when communists took over. His old age, horrible neighbors and the hard times aren't an obstacle for little Viktor to try to save his old friend from dying forgotten.