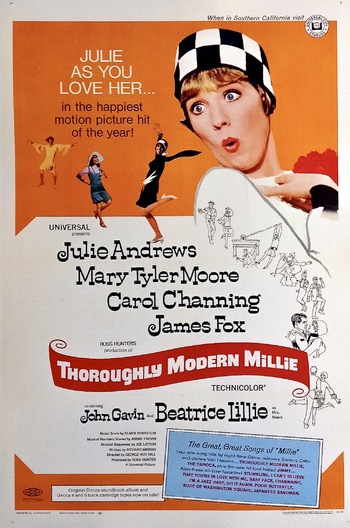 New York City, 1922. Millie Dillmount (Andrews), a "thoroughly modern girl" from Kansas, aspires to be the stenographer — and then the wife — of a wealthy man. After remaking her image, she meets Miss Dorothy Brown (Moore) at the Priscilla Hotel, which is headed by a Mrs. Meers (Lillie). Millie takes a liking to salesman Jimmy Smith (Fox), but true to her ambition soon sets her sights on rich Trevor Graydon (Gavin). Things get complicated for all when it's revealed that the hotel is a front for a white slavery ring, and that Miss Dorothy is their latest target.

The film thrives on meta humor, most notably the roadshow-esque intermission, the diegetic intertitle card and outrageous physical comedy (such as Channing's character blasting herself from a cannon into an acrobatic vaudeville act or an elevator that's operated through tap-dancing). The result is an odd combination of 1920s comedy and 1960s sensibilities, swerving between parody and straight-up comedy. It was nominated for seven Academy Awards, with composer Elmer Bernstein winning the only Oscar of his career for his score.

Adapted into a stage musical in 2002, featuring a score expansion by Jeanine Tesori and Dick Scanlan (and Gilbert and Sullivan, and Tchaikovsky, and Walter Donaldson), with lyrics by Joe Young and Sam M. Lewis. The stage show adapts the movie rather faithfully, with some overhauls to fit the theatrical format as well as some modifications of the old-fashioned gender politics and racism of its time. The original production was a star turn for Sutton Foster (replacing Kristin Chenoweth in tryouts) and won six Tony Awards, including Best Musical and Best Lead Actress for Foster. The production ran for 903 performances before closing on June 20, 2004.

This Work Contains RASPBERRY Examples Of:

Example of:
The Roaring '20s