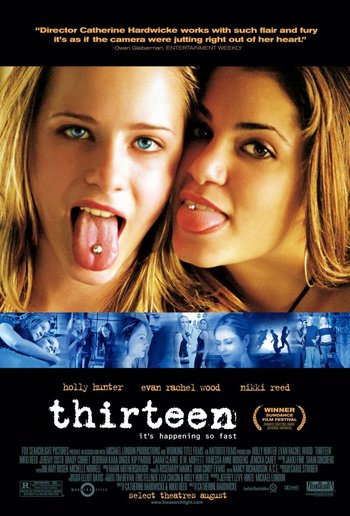 Thirteen is a 2003 drama film directed by Catherine Hardwicke, who cowrote the screenplay with then-fifteen-year-old Nikki Reed. The movie is intended to be partially autobiographical, as it shows what much of what Reed's life was like between the ages of twelve and thirteen. The movie deals with the experience of girls just barely out of their pre-teens and getting into situations that would be better handled by adults.

The plot revolves around Tracy Freeland (Evan Rachel Wood) struggling as an adolescent trying to become popular, then becoming popular only to find out that the cost to stay there in morality and self-worth to be too high. Reed co-stars as Evie, Tracy's Toxic Friend Influence.

Not to be confused with 13: The Musical.