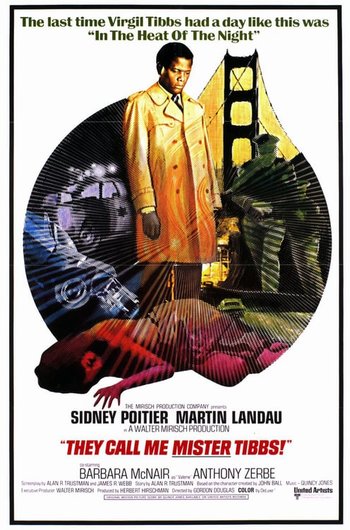 They Call Me Mister Tibbs! (the opening title card actually says They Call Me MISTER Tibbs!) is a 1970 film directed by Gordon Douglas. It is a sequel to 1967 film In the Heat of the Night.

Virgil Tibbs (Sidney Poitier), last seen having to catch a murderer while dealing with Mississippi racists in that film, is back home in San Francisco. In the opening scene, a prostitute named Joy Sturges is bludgeoned to death in her apartment. The prime suspect, based on an anonymous tip, is Rev. Logan Sharpe (Martin Landau), a crusading left-wing minister who is in the final days of a campaign to pass a controversial ballot proposition which will allow for "home rule" in San Francisco's various ethnic enclaves.

Virgil has a hard time believing this, both because of what an upstanding man Logan is (when he's not leading a social justice crusade, he's coaching youth football in the inner city), and the fact that they have been good friends for 18 years. Suspicion eventually falls on Woody Garfield (Ed Asner, wearing a toupee), a sleazy businessman who may have been Joy's pimp, and Rice Weedon, the even sleazier owner of Joy's building, who happens to be part of a drug-smuggling ring.

A subplot involves Virgil's home life. His marriage is solid but his wife Valerie wishes he'd spend more time at home. Meanwhile, his pre-teen son Andy is becoming quite the hellraiser, hitting his little sister and smoking cigarettes at home.

Quincy Jones composed the score (as he did for In the Heat of the Night). This film was followed two years later by The Organization, the third and last film in which Poitier played Virgil Tibbs.

Does not actually feature the trope They Call Me MISTER Tibbs!. Both trope and movie are named after a famous line from In the Heat of the Night.