Film / The Woman in the Window 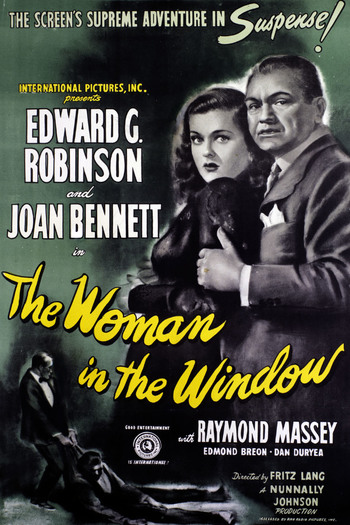 "Men of our years have no business playing around with any adventure that they can avoid."
Advertisement:

Fritz Lang's 1944 Film Noir, one of the first films to be so called.

Richard Wanley (Edward G. Robinson), a married, middle-aged psychology professor whose wife and children are away for the summer, falls in lust with a provocative portrait of a young woman. One evening the portrait's model, a budding Femme Fatale named Alice Reed (Joan Bennett), catches him ogling it and invites him up to her apartment. The two are interrupted by her boyfriend, who tries to strangle Richard, and Richard kills him in self defense. Now the two must try to quietly dispose of the body to avoid scandal, but are hampered by their lack of trust for each other. Complications include Richard's friend Frank (Raymond Massey), a district attorney who investigates the man's disappearance, and a crooked ex-cop (Dan Duryea) scheming to blackmail them both.

See also Scarlet Street, the Spiritual Antithesis to this film, made one year later with the same director and same cast.

Not to be confused with the 2021 film of the same name.