Film / The Whole Nine Yards
aka: The Whole Ten Yards 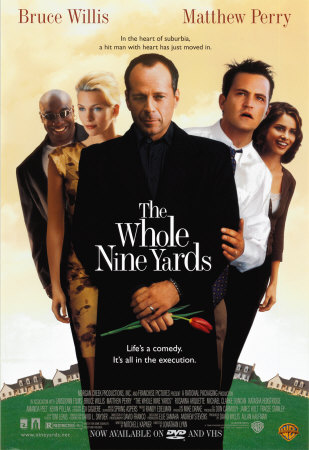 Nicolas "Oz" Oseransky (Perry) is a dentist in Montreal who is hopelessly in debt thanks to his late father-in-law's criminal deeds, and his marriage is miserable with him and his wife (Arquette) openly hating each other. Oz meets their new neighbor and recognizes a distinctive tattoo on his arm; he's Jimmy "The Tulip" Tudeski (Willis), a hitman hiding out from the mob after squealing on Lazlo Gogolák, the head of the Gogolák crime family. Oz's wife convinces him to meet the Gogoláks and sell out Jimmy for a payday big enough to pay off his debts and end their marriage.

In Chicago, Oz meets Janni Gogolák (Pollak) and Jimmy's estranged wife Cynthia (Henstridge). Both are very interested in finding Jimmy, and Cynthia secretly meets with Oz to explain that there's more to Jimmy's capture than revenge for squealing. As a "wedding present" to the two, and to hide the money from the feds at the time, Lazlo Gogolák gave them a trust worth ten million dollars, which can only be withdrawn if Jimmy, Cynthia, and Janni all sign for it, in which case they'd split it. In lieu of a signature from a living person, though, a death certificate will suffice, and if so happened that only one of them signed for the money and had death certificates for the other two, they'd get all the cash for themselves, "the whole nine yards". Lazlo wants Jimmy and Cynthia dead to get his hands on the money, and if Lazlo ends up dead Cynthia believes Jimmy will kill her for the same.

The film received a sequel, The Whole Ten Yards, in 2004, where Oz and Jimmy have to deal with Lazlo Gogolák (also played by Pollak) after he's freed from prison and comes looking for revenge.