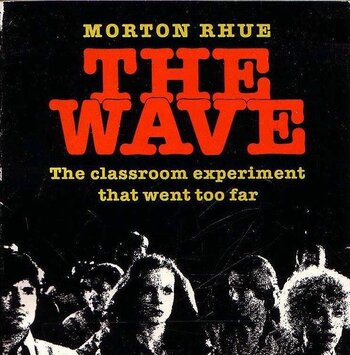 In April 1967, Ron Jones, a history teacher at Cubberley High School in Palo Alto, California, found himself struggling to explain to his class how the German people could have fallen behind the Nazis so easily. So he decided to show them personally, creating a student movement called the Third Wave

(after the common belief that the third in a series of waves is the last and largest). The movement emphasized conformity and the greater good, treating democracy and individualism as the downfall of civilization. Jones started with things like drilling his class in proper seating and posture, before moving on to discipline, salutes (which conspicuously resembled the Nazi salute), and the transformation of himself into an authoritative figure. In just two days, Jones had turned his class into a model of efficiency, discipline and community, with a marked improvement in academic achievement and motivation, and the Third Wave began to spread beyond his history class. By the end of day three, over two hundred students had been recruited, membership cards were being given out, banners were flying, and Third Wave members were telling Jones when others were violating the rules — all of which Jones hadn't told his students to do, as such incidents were completely unexpected developments.

Realizing that he was losing control of the Third Wave, Jones decided to end it. On day four, he announced that the Third Wave was actually part of a nationwide youth movement, and that tomorrow at noon, an assembly would be held in which the movement's national leader and presidential candidate would be revealed on television. At the assembly, the students were met only with an empty channel. Jones revealed a few minutes later that the entire Third Wave was an experiment in how fascism can so easily claim the hearts and minds of the masses (even those who had sworn "it can't happen here"), and played a film about Nazi Germany.

The Third Wave experiment has since been fictionalized three times. The first was The Wave

, a Made-for-TV Movie starring Bruce Davison as the teacher, which aired on ABC in 1981, and later became part of their ABC Afterschool Special series. The same year, a Young Adult novelization of the movie was written by Todd Strasser under the Pen Name Morton Rhue. Finally, in 2008, the German movie Die Welle, with Jürgen Vogel as the teacher, took the already-uncomfortable premise and brought it into the very country that birthed Nazism, to show that even a place that had experienced the horror of fascism could see it happen again.

Not to be confused with the Norwegian Disaster Movie from 2015.

Tropes in the TV movie or the book The Wave: