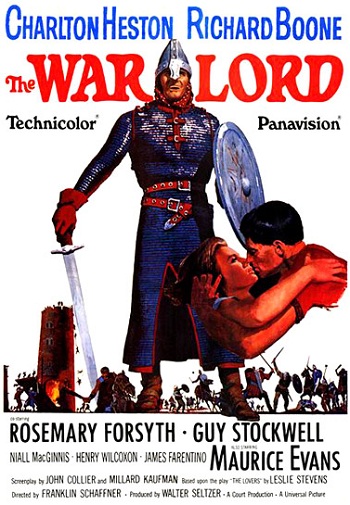 Chrysagon de la Cruex (Heston) is a knight in the service of the Duke of Normandy. He is sent with his brother Draco (Stockwell) and Bors (Boone), an old warrior who swore to protect him, to a coastal village where the previous lord was killed in his tower by Frisian raiders. He battles them, captures the Frisian chief's son and begins to rebuild the Duke's authority over the pagan villagers. He falls in love with Bronwyn (Forsyth), one of the local women, and decides to keep her for himself, which angries both her fiancé Marc (Farentino) and the other villagers. Chrysagon then finds himself betrayed by the villagers, who call the Frisian raiders to help them besiege the tower to get both Bronwyn and the young Frisian prince back.

Up until this film, most Hollywood representations of feudal life were glamorized, with bright and clean colors, Paragons and Knights in Shining Armors aplenty, with the issue of religion rarely brought upon. The War Lord attempts to portray the late 11th century in a more accurate fashion as dirty, violent, and ruled by brute force or pragmatism, and shows how Christianity dealt with local paganisms. It also shows how the social stratification imposed by feudalism governed every human relationship, with power devolving from the duke, to the knight, to his men at arms, the church and the peasantry at the very bottom.

Not to be confused with the comics The Warlord nor the film Lord of War.