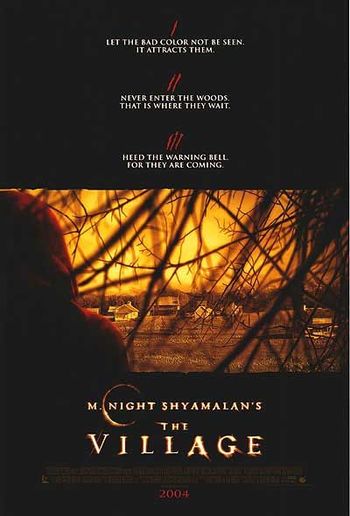 A 2004 Mystery and Thriller film by M. Night Shyamalan set in a turn-of-the-century village in Pennsylvania.

The villagers believe that the woods surrounding their hamlet are inhabited by fell supernatural creatures, and fear to venture outside. As an incident leads the creatures to begin antagonizing the villagers; one person must leave the confines of the village in order to gather medicine.

Like most of Shyamalan's movies, the film has a Twist Ending, and a quite controversial one at that; the ending garnered so many split reactions that it's the reason why this movie is widely seen as the start of Shyamalan's fall from grace.

Rumors exist that it was partially inspired by a Young Adult novel called Running Out of Time (note: reading the summary on that page will spoil this film).

Also note: As this is a suspense film, plot twists come steadily and often. So naturally, this page is spoiler-heavy.