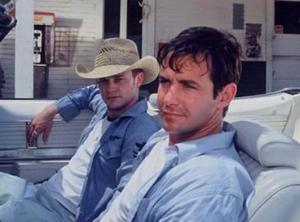 Tommy and Alan on their road trip

The Trip is a 2002 gay romance period film that takes place in the 1970s and 1980s. Tommy (Steve Braun) is a political activist attending college during the 1970s; at a party he meets Alan (Larry Sullivan), who invites him to dinner. Tommy accepts, thinking it's a date, only to find out later that Alan wanted to interview him for a book he is writing about homosexuals and that Alan has a girlfriend, the kooky Beverly (Sirena Irwin). Beverly, however, sees the chemistry between the two men and leaves Alan.

Tommy and Alan become friends, but eventually have a fight, and Alan writes and publishes his booky - anonymously, thanks to the advice of his homophobic attorney Peter (Ray Baker). Tommy comes to see him and apologies are made. The two become a couple, and we flash four years later to 1977.

Anita Bryant's crusade against homosexuality is in full swing, and Alan's book is used as a tool to propel it. It's leaked out that Alan was the writer, and his relationship and job are ruined. He ends up as a sort of pet for Peter, and lives with him for the next eight years.

In 1984, Alan finds out Peter was the one to leak to the press that he wrote the book, and leaves, wanting to reunite with Tommy. They reunite, and take their dream of a road trip through Mexico, but Tommy is dying. As the road trip ends, Tommy dies, and Alan writes about the experience.

Not to be confused with the 2010 British comedy film of the same name or the 1967 film by Roger Corman.