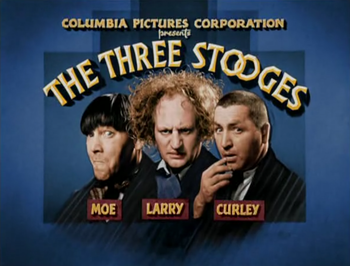 The brain trust.
"Well, they're these kinda funny looking guys... who like to hit each other."
— Jerry, Seinfeld
Advertisement:

The Three Stooges are best known for the dozens of short subjects they turned out through Columbia Pictures starting in the 1930s. In fact, with 190 short films, not including their features and numerous cameo or guest appearances dating back to 1930, this trio had the longest film series in Hollywood history.

Though six actors appeared as Stooges at varying times, people are most familiar with the iconic lineup of Moe Howard, the bully-like leader (and the only actor to stay with the trio for its entire existence); Larry Fine, the frizzy-haired sort-of straight man; and Jerome "Curly" Howard (Moe's younger brother), the bald, oddball guy with the weird mannerisms and verbalizations.

Like many Hollywood successes, the Stooges came about their success largely through serendipity. The Stooges started out as second bananas to former vaudeville comic Ted Healy, and were not originally credited as Stooges. The original line-up consisted of Moe, Larry and Shemp Howard, Moe's elder brother. After making one film with Healy, 1930's Soup to Nuts, Shemp launched a solo career as a comic and character actor. Jerome (who had no prior acting experience) was recruited, dubbed Curly despite (or perhaps because of) his shaved head, and the trio continued to appear in films with Healy.

In 1934, Columbia offered them their first picture deal and Moe promptly seized the opportunity to make the big time without their notoriously drunk and abusive employer. Their first film, Women Haters, was moderately successful; their second, Punch Drunks, was more so; and the third Men in Black, was nominated for an Oscar and the group found its niche appearing in a half dozen or so short films (16-20 minutes) a year.

Curly was forced to retire in 1947 after suffering a stroke during a break in filming, and Shemp Howard (who was reluctant to rejoin, as he had a successful solo career, but realized that Moe and Larry would have nothing without the Stooges) rejoined the act, changing the dynamic and triggering an ongoing "Curly vs. Shemp" debate that presaged the similar Joel vs. Mike debates of more recent vintage. After Shemp died in 1955, a bizarre set of Stooges shorts were created in order to complete the trio's current contract, making use of a body double and stock footage to make it appear that the now-deceased Shemp had participated, a technique later dubbed the Fake Shemp in his honor by director Sam Raimi. In 1956, Joe Besser, already a well-established comedy star, joined the group for their last shorts with Columbia (the short-film format was retired in 1959), and "Curly Joe" DeRita, so nicknamed because of his resemblance to the original Curly, would sign on for their "post-shorts" career which involved a number of feature films as well as hosting a popular cartoon series.

The Stooges continued to make popular feature films and TV appearances until 1970 when Larry Fine suffered a stroke during production of a TV pilot called Kook's Tour. In the early 1970s, longtime Stooges supporting actor Emil Sitka (best known to most Stooges fans for the line "Hold hands, you lovebirds!") was promoted to "Third Stooge", but Moe died in 1975 before any more movies were made, ending the era of the original Three Stooges. Curly-Joe continued to do live performances for a short time with two other individuals filling in for Moe and Larry, but then retired.

The Three Stooges are one of the few comedy acts of the black-and-white era that continue to attract fans and remain so firmly embedded in the popular culture that a fifteen second silent cameo depicting them as airport firefighters still provides one of the biggest laughs in It's a Mad, Mad, Mad, Mad World decades after their heyday. Their popularity is such that video games have been made about them all the way up to the Game Boy Advance era.Although... Said GBA game is actually a very minimally Polished Port of a 1987 Amiga game, which has also seen the NES, 8-bit computers, and bizarrely, the PlayStation. And while their broad slapstick has been often derided by critics, it's also a key reason why they're popular even in nations where English isn't spoken. They also had two animated adaptations: a syndicated series in 1965, with live-action wraparounds between cartoons, and The Robonic Stooges, a segment of Hanna-Barbera's Skatebirds. Unfortunately, neither of these truly took advantage of The Stooges' already cartoon-like nature.

That's the short version of it. Wikipedia has practically a small book

on the team, their history and their impact. Nyuk nyuk nyuk.

Trope-wise, it is hard to do slapstick without referencing the Stooges. They did it all. Wait. Here is the throw-down: If you can come up with a slapstick bit that was not done by the Stooges, the Wiki will award you a delicious, fresh-baked custard pie.note In your face. Let's not forget tradition! Notably, the Groin Attack trope is not on this page. This could be an oversight or deliberate, due to Hays Code enforcement. The movie definitely has a Groin Attack, but it's not the original Stooges...

Don't bring any lame one-foot-in-a-wastecan, guy-turns-with-ladder-and-bonks-another-guy-in-the-eye stuff. We have no pies for that.

A Made-for-TV Movie biopic about the Stooges produced by Mel Gibson came out in 2000 on ABC. While it serves in large part as an homage to their comedy style, to the point of recreating several of their shorts, it also confronts many of the not funny parts of their careers, particularly Curly's health issues.

was released on April 13, 2012. It was directed by the Farrelly Brothers, appropriately enough. Described on the DVD as a love letter to the Stooges, the film recreates many of the trio's tropes, and adds a few more. For the movie's section of tropes, click here.

Has a recap page in progress.

The Three Stooges provides examples of the following tropes:

In "Mummy's Dummies", the Stooges are excited at the chance to wed the Princess. But when she reveals a repulsive face underneath her veil, Moe and Larry step back and leave Shemp to be the, um, "lucky man".

In "Mummy's Dummies", the Stooges are excited at the chance to wed the Princess. But when she reveals a repulsive face underneath her veil, Moe and Larry step back and leave Shemp to be the, um, "lucky man".