Film / The Pumaman
aka: Puma Man 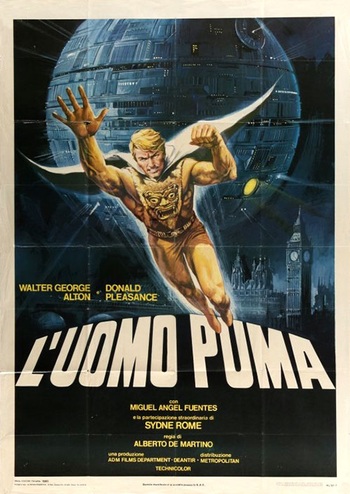 The Pumaman, also known as Puma Man, The Pyooma Man, Thep Yewmaymin, or L'Uomo Puma, is a 1980s superhero movie produced by Italians in English.

The plot? Our villain is Dr. Kobras (Donald Pleasence in a shiny futuristic muu-muu), who has gotten his hands on a huge golden Aztec mask, which contains alien circuitry that allows it to control minds. He plans to use it to dominate world leaders, and already has a collection of papier-mâché heads signifying his mental conquests. Only one man can stop him: the eponymous Pumaman, the scion of a line of "man-gods" sired by ancient spacefaring Aztec alien puma things. He's an American living in nearby London, so Kobras sets off to determine who his foe is by hurling potential candidates out of windows. Only the Pumaman could survive that, y'see.

Our hero is Tony Farms (Walter George Alton), an American paleontologist who is quickly discovered by Vadinho (Miguel Ángel Fuentes), an Aztec priestnote from the Andes Plateau of the space-gods. The hulking holy man becomes Tony's mentor by hurling him out a window, chasing him around a university, and breaking into his apartment to aggressively push his belief system and fashion accessories. Tony is understandably reluctant to get involved in all this, but after mind-controlled love interest Jane Dobson (Sydne Rome) is used to lure him into a trap, Tony finally accepts his heroic destiny and a magical Aztec belt, transforming into the mighty Pumaman!

Now firmly allied with Vadinho, Tony sets about mastering his puma-derived superpowers to get the sacred mask out of Kobras' hands. He can see in the dark, sense danger, "leap" great distances (or fly, the writers don't seem to be sure), teleport, and feign death quite convincingly — you know, standard puma stuff. Oh, and his fingers can act as super-strong "claws", which Vadinho belatedly remembers to mention in the middle of a major battle. And possibly super-strength, which he uses to flip a car over and break the ropes he's bound with late in the movie, but not much else. Anyway, with these skills in hand, Tony heroically attacks Kobras' mansion stronghold, is soundly defeated, gets caught by Kobras' hypnosis, retreats, loses his superpowers through Kobras' mental commands, is nearly Driven to Suicide by Kobras' mind games, and heroically plays dead until the villain's minions go away.

Vadinho then leads his own assault against Kobras, using a suicide belt to bluff his way inside. The Aztec resists the villain's hypnotism and demolishes his command center, while Jane Dobson smashes Tony's papier-mâché head, removing Kobras' mental control over him and restoring his powers. Pumaman quickly teleports to the rescue and helps the Aztec take down wave after wave of mooks, prompting Kobras to make a run for it. In the end, Tony is barely able to overcome an elderly bald man and cause Kobras' helicopter to crash, the golden mask is recovered, Vadinho gets beamed up by the alien-god-things, and Tony and Jane join the Quarter-Mile-High Club.