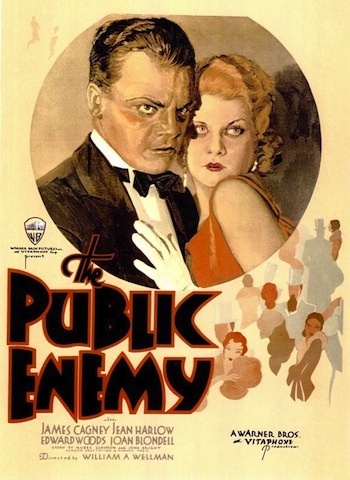 "I ain't so tough!"
"I know what you've been doing all this time, how you got those clothes and those new cars. You've been telling Ma that you've gone into politics, that you're on the city payroll. Pat Burke told me everything. You murderers! There's not only beer in that jug. There's beer and blood — blood of men!"
— Mike Powers, confronting his brother
Advertisement:

The Public Enemy is a 1931 pre-Code Warner Bros. gangster film directed by William A. Wellman. The film that made James Cagney a star, it also typecast him as a tough guy and gangster, and he'd keep on playing roles like that throughout The '30s.

The "Public Enemy" of the film's title is Tom Powers (Cagney), a young Irish-American growing up in the projects of Chicago. He starts out with petty crime as a juvenile, but Prohibition offers him a chance to graduate to bootlegging and murder. Crime doesn't pay, though, and Tom, the public enemy, is destined for a bad end, "the end of every hoodlum."

Jean Harlow appears as Gwen, Tom's moll. Joan Blondell plays an earlier girlfriend that gets thrown over in favor of Gwen. Mae Clarke plays yet another girlfriend, who has a memorable encounter with a grapefruit.