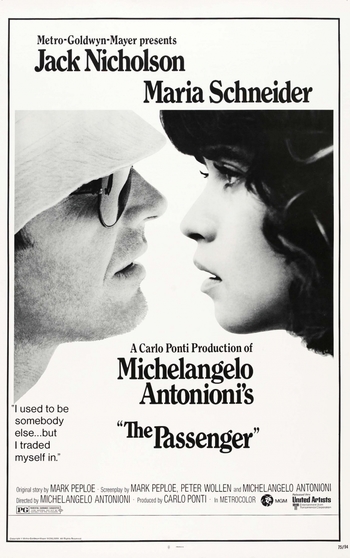 "I used to be somebody else...but I traded myself in"
The Girl: People disappear everyday...
David Locke: ...every time you leave the room.
Advertisement:

The Passenger (Italian title Professione: Reporter) is a 1975 film by Michelangelo Antonioni, starring Jack Nicholson as David Locke, Maria Schneider (of Last Tango in Paris fame) as The Girl, and Jenny Runacre as David's wife.

This film depicts a disaffected television journalist David Locke who working in Africa, implied to be Chad, meets a certain David Robertson, a man of obscure occupations but is later revealed to be an Arms Dealer providing weapons to rebels. When the latter dies Locke assumes his identity, and exchanges his with his. This means that for the rest of the world, David Locke the Reporter is dead, while David Robertson still lives and is wanted by authorities to question him about the mysterious death of a reporter and journalist.

Despite his misgivings, such as the fact that Robertson is regularly paid lavish sums, he is regarded as a comrade by some rebels, and the fact that he's selling weapons, he starts embracing his role, simply because he doesn't want to go back to his old life. Locke travels in Europe, on his way he meets The Girl who becomes his loyal sidekick. Following on from the effects of the dead man, Locke goes to Spain. David's wife, meanwhile, burdened by guilt and grief, starts looking for "Robertson", while the African government who is opposed by the rebels Locke has now cast his lot with wants to hunt him down as well.