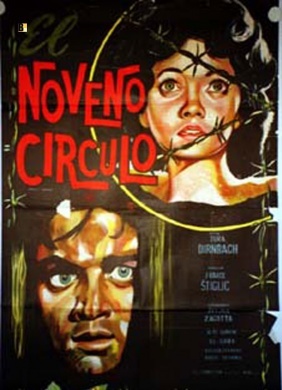 The Ninth Circle (Deveti krug) is a 1960 film from what was once Yugoslavia, directed by France Štiglic.

It is set in Zagreb, Croatia, in World War II during the German occupation, specifically 1941-42. The Vojnovic family, who are Christians, are good friends with the Alakalaj family, who happen to be Jews. One night the Alakalajes are visiting the Vojnovics, when the alarm for German curfew sounds. Father Boris insists that they must go home, but daughter Ruth, in her late teens, begs to stay the night with the Vojnovics. Boris agrees to let his daughter stay overnight.

Come the next morning, Mr. Vojnovic escorts Ruth home—only to find Nazis throwing her father, her little brother, and all the other Jews of the neighbourhood into trucks. Mr. Vojnovic hurriedly takes Ruth back to his home. Desperate to save her, the Vojnovics marry her to their nineteen year old son, Ivo, thinking that if she's married to a Christian, she'll be safe.

The only problem is that Ivo isn't all that keen on getting married, even if it is only for show. He has a Christian girlfriend, the very pretty Magda, and he doesn't want to be tied down. Unsurprisingly, despite his reluctance, Ivo starts to develop feelings for Ruth, who is kind, sweet, and drop-dead gorgeous. Unfortunately for the young lovers, however, Nazi oppression threatens their happiness.

, which was not a Nazi camp, but an all-Croatian affair.