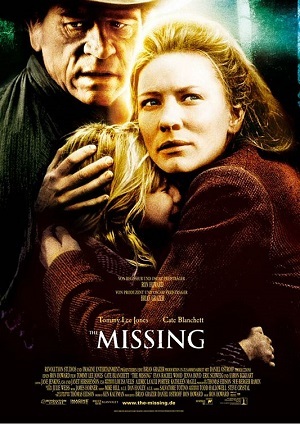 The Missing is a 2003 western film directed by Ron Howard and starring Tommy Lee Jones and Cate Blanchett.

Magdalena Gilkeson (Blanchett) is a widowed frontier woman living on her ranch in 1885 New Mexico with her two young daughters, Lily (Evan Rachel Wood) and Dot (Jenna Boyd). Life isn't easy, but they make the most of it with Maggie's live-in lover, Brake Baldwin (Aaron Eckhart). One day a mysterious man named Samuel Jones (Jones) comes dressed like an Apache Indian, seeking shelter. Maggie gives him a bed and supper, but is otherwise cold towards him—recognizing that he is the father who had abandoned her and their family when she was young, and blaming him for her mother and brother dying without him being there to help. When Maggie and Dot discover their ranch hand and Brake brutally murdered in the nearby woods the next day, and Lily missing, they find out that a band of renegade Chiricahua men led by Pesh-Chidin (Eric Schweig), nicknamed “El Brujo”, kidnapping girls to sell as sex slaves are responsible. Maggie is forced to put her feelings aside and accept her father's help to rescue Lily.