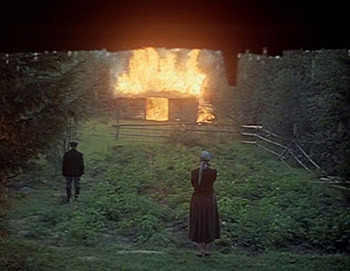 The Mirror (also referred to as Mirror; Зеркало in Russian, which romanizes to Zerkalo) is a 1975 art film directed and co-written by Andrei Tarkovsky. It is difficult to describe because of its plot, whose semi-autobiographical, nonlinear nature defies any kind of concrete narrative structure.

It is best to describe the film as the thoughts, dreams and recollections of Alexei (Ignat Daniltsev) and his son Ignat (Ignat Daniltsev) about his mother Maria and wife Natalia (both played by Margarita Terekhova). These memories stretch from the Great Patriotic War to the present day. In what has been described as a cinematic equivalent to a stream of consciousness, the film is conveyed through contemporary scenes, newsreel footage, and poems written and read by Tarkovsky's father Arseny, its cinematography switching between color, black-and-white, and sepia.

The film never officially premiered due to Gos Kino complaints, but was released on DVD and subsequently welcomed into the Tarkovsky oeuvre.