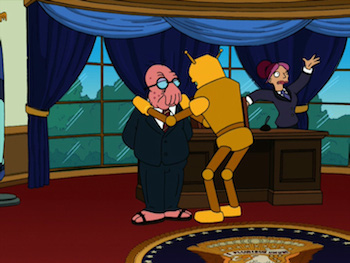 The plot is about a son (Calculon of All My Circuits fame) not wanting to follow in his father's (Zoid in his comeback role) footsteps — that job being President of Earth, and the son is currently the Vice-President. The film also stars Zoid's nephew John A. Zoidberg as the Vice-President's associate Lieutenant Smith.

Despite negative reception upon its premiere (In fact, everyone left the theater before it ended), the film helped garner Zoid an Academy Award for Best Actor in a surprise win.