Film / The Little Rascals
aka: Our Gang 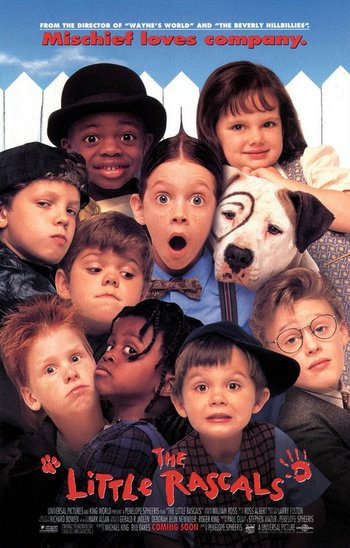 Boys will be boys, girls will be girls, and sometimes kids can really be rascals.
Advertisement:

Hal Roach created this series of short comedy films in the 1920s. During the silent years (1922–29), Roach tried such titles as Hal Roach's Rascals, but since the first short was titled Our Gang, moviegoers started calling them the "Our Gang Comedies". The series moved into sound just prior to the Great Depression. In 1938, Roach sold the series to Metro-Goldwyn-Mayer. The sell is generally regarded by fans as the series' Seasonal Rot period. The child cast changed almost annually until the series ended in 1944.

It is said that Hal Roach got the idea for the comedies that revealed the world as seen from a child's point of view when he heard through his office window a conversation among some children in a lot next door arguing over discarded scraps of wood they were trying to split up for salvage.

In 1949, Metro-Goldwyn-Mayer, which had purchased the series from Roach in 1938, sold the films back to him but retained the rights to the Our Gang name. Thus, when Roach packaged the films for television syndication in the mid-'50s, the series was retitled The Little Rascals, leading to a certain amount of Title Confusion over the years.

Part of the reason why the series is remembered even to this day is that it showed black and white children playing together as equals, which was more or less unheard of for films of its day. Hal Roach was actually planning to make a whole series out of Ernie Morrison, one of the first black child stars in Hollywood, but when distributors said it wouldn’t fly, he put Morrison in the Our Gang films alongside Allen Hoskins as Farina and the white child actors for the rest of the group. Ever since then, each iteration of the series had at least 1 black child, who in the shorts got to play with their white counterparts, eat in the same places as them, and even go to school with them! This is not to say racial humor wasn’t ever used (see below), but it was radical enough that Southern theaters often complained or outright refused to show the series.

For the Saturday Morning Cartoon produced by Hanna-Barbera in 1982, see this page.

Little Rascals films with their own pages:

Other films contain examples of:

Tropes specific to the 1994 movie:

Tropes specific to the 2014 movie: