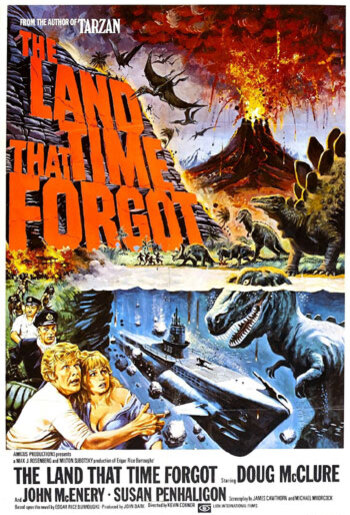 The Land That Time Forgot is a 1975 fantasy/adventure film produced by Britain's Amicus Productions, based on the novel of the same name by Edgar Rice Burroughs. Directed by Kevin Connor. Screenplay by Michael Moorcock. The cast included Doug McClure, John McEnery, Keith Barron, Susan Penhaligon, Anthony Ainley and Declan Muholland.

During World War I, a group of people that consists of a German submarine crew and the survivors of a ship they torpedoed are stranded together on an uncharted continent where surviving dinosaurs co-exist with primitive humans. Their only chance of getting the submarine back in working order and returning to civilization is to work together, something more easily said than done.

Followed in 1977 by a sequel, The People That Time Forgot. Both films were distributed by American International Pictures in the United States.

This film was riffed in season 11 of Mystery Science Theater 3000. Tropes pertaining to that episode can be found here.

The 1975 film The Land That Time Forgot provides examples of:

The 1977 film The People That Time Forgot provides examples of: