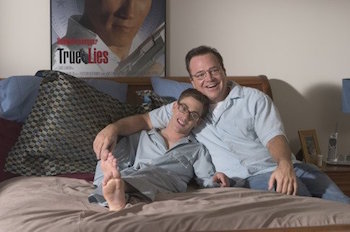 The Kid & I is a 2005 Comedy film written by and starring Tom Arnold.

Bill Williams (Arnold) is a washed-up actor whose career went into a decline after he wrote and co-starred in the summer blockbuster True Lies. He's saved from an aborted suicide attempt when he is hired by billionaire Davis Roman to write and star in a sequel, "Two Spies"; his adulation sours when he discovers the catch — the movie is designed exclusively as a birthday-party wish fulfillment gift for Roman's son Aaron (Eric Gores), a die-hard True Lies fan who suffers from cerebral palsy. As complications pile up, Williams struggles to complete the project, and draws inspiration from Aaron's tenacity, optimism, and friendship.

The Kid & I is best known for its Based on a True Story roots — the movie came about when Tom Arnold's neighbor, technology billionaire Alec Gores, hired Arnold to helm a movie starring his son Eric, and bankrolled the insanely elaborate present for his beloved son. It was quietly released in December 2005 to mixed reviews; Roger Ebert and Peter Sobczynski enjoyed it for its sincerity and Self-Deprecating Humor, while The Onion noted that its tiptoeing around Aaron/Eric's condition hampers the movie's potential.