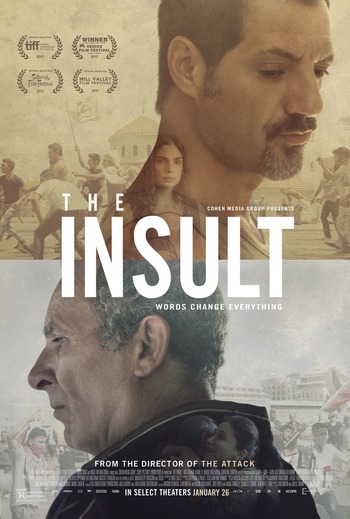 The Insult is a 2017 film from Lebanon directed by Ziad Doueiri.

Tony Hanna is a Lebanese Christian with an auto garage and a heavily pregnant wife, Shirine. He is a fervent supporter of Lebanon's Christian Party, which agitates against the substantial population of Palestinian refugees in Lebanon.

Tony and Shirine leave in a second-floor apartment facing the street. The drain to their balcony is a code violation because it drains water onto the sidewalk below. One day a construction foreman, Yasser Salameh, arrives on the street with his crew. Tony, who can tell by the accent that Yasser is a Palestinian, rudely refuses him entry to the apartment. When Yasser and his men repair the drain from the outside, Tony smashes the drain. Then he deliberately hoses down his patio, splashing water on Yasser below.

This unleashes a flood of disasters that include a trial, another trial, an assault, riots in the streets, terrorists attacks on Tony's garage, and the personal intercession of the President of Lebanon, as well as a threat to the life of Tony and Shirine's newborn baby. All of this is brought about when the feud between Tony and Yasser becomes a proxy for the fraught, tense relationship between Lebanese Christians, Lebanese Muslims, and stateless Palestinian refugees.