Film / The Inquest of Pilot Pirx 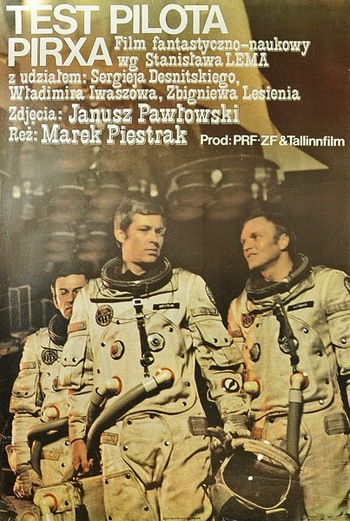 The Inquest of Pilot Pirx (Polish: Test pilota Pirxa, Russian: Дознание пилота Пиркса, Estonian: Navigaator Pirx) is a joint Polish-Soviet 1978 adaptation of one of the Tales of Pirx the Pilot by Stanisław Lem, "The Inquest". It was released with Polish, Russian, and Estonian audio tracks.

The world is buzzing as several corporations attempt to start production of perfectly humanoid robots, first and foremost for the spaceships. UNESCO is against the "pseudo-humans" and manages to offer the corporations a deal: give a robotic crew a task in space and let a human captain watch over them, so that later he would make a full review of the robots' abilities. Pirx, an honest and straightforward pilot, famous for being prejudiced against the entire idea, is chosen for the task. However, the crew isn't fully robotic: some of them are humans, and all of them are ordered to say, if asked, that they are human. This leads to Pirx being faced with an Everyone Is a Suspect puzzle, while the real robot on board prepares to sabotage the whole mission.

The Inquest of Pilot Pirx contains examples of: