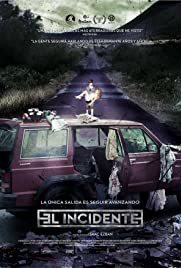 The Incident is a 2014 Mexican film starring Raúl Méndez, Nailea Norvind, Hernán Mendoza, Humberto Busto, Fernando Alvarez Rebeil, Gabriel Santoyo, Paulina Montemayor, Hector Mendoza, Leonel Tinajero, and Marcos Moreno, about a set of two time loops. In one, small-time criminals Carlos and Oliver travel an unending stairwell, pursued by Officer Marcos. In another loop, Sandra travels with her children, Daniel and Camilia, to meet her new husband Roberto, down an endless road. Along those loops, the two groups encounter growing piles of their possessions until, near the end of their lives, they find new beginnings, back where they started.