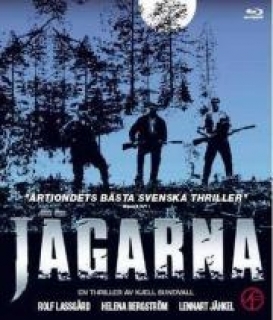 Leif: "Relax. There's not a cop around for ten miles."

The Hunters (Swedish Jägarna) Is a 1996 Swedish Nordic Noir film, written and directed by Kjell Sundvall.

Stockholm cop Erik (Rolf Lassgård) has decided to move back to his hometown in northernmost Sweden, after being involved in a traumatic shootout with a robber. Arriving on the day of his father's funeral, Erik receives a warm welcome from his brother Leif (Lennart Jähkel) and all his childhood friends. Deciding to stay, he takes a job as a criminal detective in their small town, and immediately takes an interest in the widespread poaching which the other cops seemingly aren't troubled by at all.

Unbeknownst to Erik, he has just set some terrible gears in motion, and he might not like what he finds in this Town with a Dark Secret.

Savage and disturbing even by Nordic Noir standards, The Hunters draws inspiration more from films like Deliverance, Straw Dogs (1971) and First Blood than the standard Police Procedural fare. It helped to cement the image of "Norrland" (Everything from Hälsingland and above) as a sort of Hillbilly mixture between the Savage South and Grim Up North for the rest of the country. Needless to say, many Norrlanders either hate or adore this movie (and Kjell Sundvall) to this day.

The film has had a couple of sequels after its first release, with one film releasing in 2012, and a series premiering November 2018, both of which have gotten quite alot of praise, though the latter more than the former. The 2012 film centers around Leif's biological son Peter and his adoptive family, with the father Torsten (Peter Stormare) being Erik's latest colleague when a brutal murder on a woman occurs during a hunting event, and eventually Erik is forced to choose between loyalty or morality when he realizes that someone not so far away from them are committing the murders. The 2018 series introduces the character Markus Lindmark, a cave entrepreneur and businessman from humble beginnings who is criticized due to his projects potentially damaging the landscape, and that's when a ruthless murderer comes along who instantly attacks Markus and his business for unknown reasons. Once again however, as Erik grows more attached to the case, he notices even more corruption everywhere than he ever could have predicted, and has to make up his mind if he wants to stand against everyone else in his quest to reveal the truth, or if he needs to save his own skin this time.