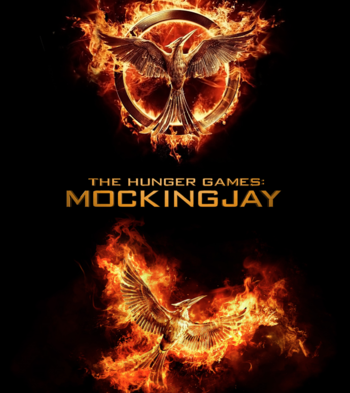 Eddy: Are you here to fight with us?
Katniss: I am. I will.
"What do all those deaths mean? They mean that our lives were never ours. There was no real life because we didn't have any choice. Our lives belong to Snow and our deaths do, too. But if you kill him, Katniss, if you end all of this, all those deaths - they mean something."
— Peeta Mellark

The Hunger Games: Mockingjay is the Grand Finale of the four-part cinematic adaptation of Suzanne Collins's young adult novel trilogy The Hunger Games, directed by Francis Lawrence and adapted by Danny Strong and Peter Craig. The film is split into two parts.

Picking up immediately where the previous film left off, Katniss Everdeen arrives in District 13 where she struggles to become the perfect posterchild for the anti-Capitol rebellion. Meanwhile, Peeta is still a hostage of the Capitol, and his absence is hard on Katniss, whose emotional state has deteriorated after two consecutive Hunger Games. Soon enough, the real war begins — and as President Snow promised, it's not pretty.

The split between the movies happens after chapter 12.

Mockingjay is also the last film to feature Philip Seymour Hoffman since the actor died in February 2014. 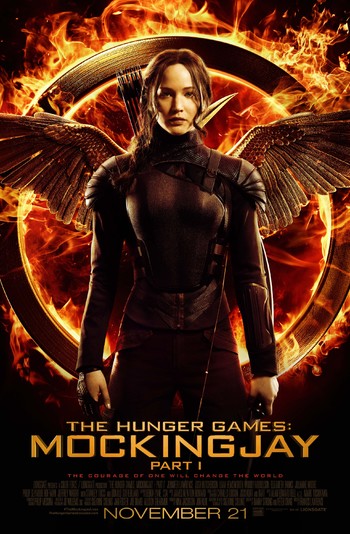 "Fire is catching. And if we burn, you burn with us!"
Part 2 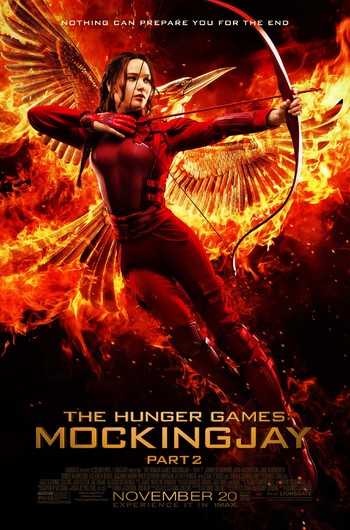 "Tonight, turn your weapons to the Capitol! Turn your weapons to Snow!"
"Did you have a nightmare? I have nightmares, too. Someday I'll explain it to you. Why they came, why they won't ever go away. But I'll tell you how I survive it. I make a list in my head of all the good things I've seen someone do. Every little thing I can remember. It's like a game. I do it over and over. Gets a little tedious after all these years, but there are much worse games to play."
— Katniss Everdeen