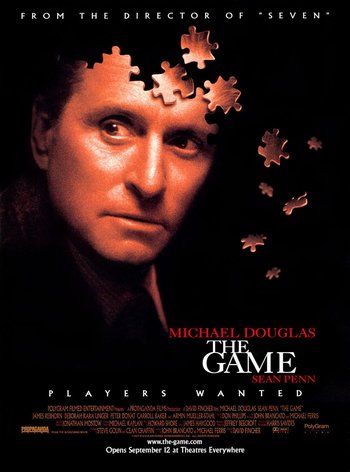 "What do you get for the man who has... everything?"
"I don't care about the money. I'm pulling back the curtain. I want to meet the wizard."
— Nicholas van Orton
Advertisement:

The Game is a David Fincher directed movie, released on September 12th, 1997.

It centers around Nicholas van Orton (Michael Douglas), a bored, disillusioned businessman who spends his days in his office. So well-ordered he has driven out all romantic prospects, Nicholas soon receives a gift certificate from his brother Conrad (Sean Penn), which involves participating in a potentially-dangerous game, courtesy of a group called Consumer Recreation Services. Not long after signing up things soon get bizarre and the line between the game and reality begins to blur.

Now has a character page in desperate need of expansion.

This film runs on various twists and turns. You will learn them if you read any further. You Have Been Warned.

The Game contains examples of: