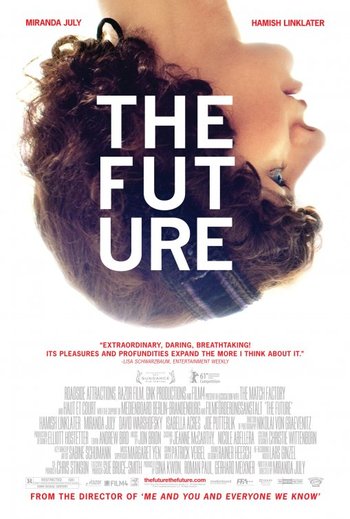 A film by Miranda July, The Future is the story of Sophie and Jason, a couple who decide to adopt an injured stray cat, Paw Paw. Because Paw Paw has a broken paw, they must wait for 30 days while he heals, and if they do not adopt him, he will be put down. As the month passes, they slowly begin to adapt to the idea of adopting and caring for him, while coming to terms with their own flaws. It's a very surreal movie, hovering on the line between fiction, fantasy and batshit crazy in that the moon talks, Paw Paw narrates part of the film and there's a sentient shirt (among other things). That being said, it still has a solid plot with some very realistic moments.

The Future was part of the Official Sundance Selection 2011.

The Future provides examples of the following tropes: